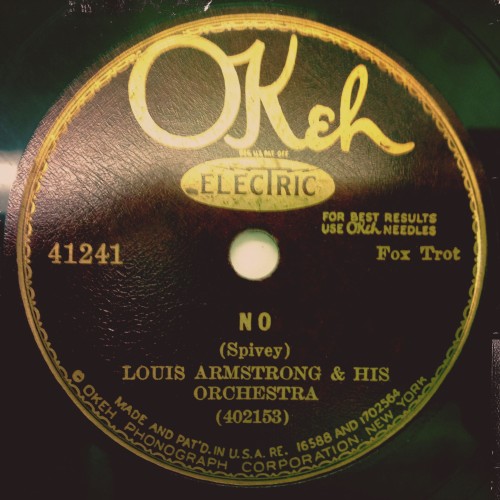 The casual fan of jazz could be forgiven for thinking that Louis Armstrong invented the musical form. His early recordings were so influential and his later recordings so popular that it just seems a given. While it’s difficult to be absolutely certain who invented jazz—though most historians give credit to Buddy Bolden, a fellow son of New Orleans whose band started playing the music in 1895—it is certain that Louis Armstrong’s combination of musical innovation and likability made him an ambassador for the music.

Armstrong’s earliest recordings were made with King Oliver’s band in Chicago, in the early 1920’s. This song was recorded in 1928, just before the now-divorced Armstrong had moved to New York City. While in Chicago, Armstrong had recorded some wonderful songs with his Hot Five and Hot Seven groups, but now he was working with a much larger ensemble, hence the switch to Louis Armstrong & His Orchestra. “No” doesn’t seem to reveal much added fullness to the earlier sound, though the addition of Zutty Singleton’s drums does give the song a nice pulse. The song is sometimes called “No, (Papa, No)”, which does give the modern listener pause. Was the song about a kid just refusing to eat his vegetables, a kid begging to not be spanked because he didn’t eat his vegetables, or is it about a woman begging to not get hit by her man?  The shorter version of the song’s title fits nicely with the sassy tone of the music, so I’m going with a two year old kid who has just learned his favorite word. That’s part of the fun of instrumental jazz—you can imagine all kinds of things about the titles.

“Basin Street Blues” is most definitely about a street that ran through Storyville, the famed red light district of New Orleans. It opens and closes with Earl Hines playing the Celesta, a remarkable instrument that sounds like a cross between a piano and a xylophone—think Sugar Plum Fairies from The Nutcracker.

We also hear Louis scat in a most relaxed manner on this tune, proving that the rhythmic vocalization needn’t be so frenzied as one usually thinks it to be. Louis Armstrong is often credited with being the first artist to employ scatting, having used it in his 1926 hit “Heebie Jeebies.” That, like the belief that he invented jazz, is erroneous. But sometimes collectors and historians get a little too wrapped up in the debate of “Who Did It First?” when they should really spend a  little more time just enjoying the music—especially when the music is this good.