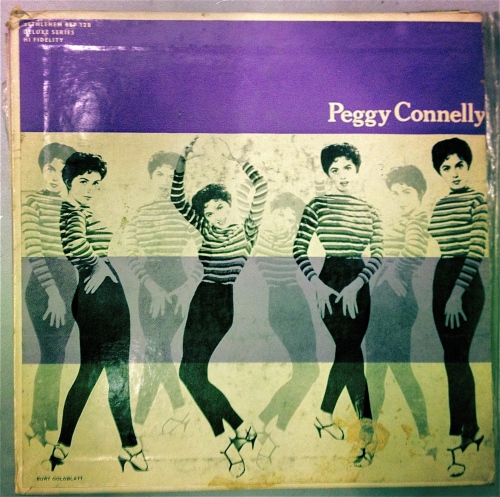 Peggy Connelly was born in Shreveport, Louisiana in 1931 and soon after raised in Fort Worth Texas.  Her debut album, Peggy Connelly with Russ Garcia—That Old Black Magic, would be her only solo recording for Bethlehem Records. This EP featured songs taken from that album and also featured the exact same cover that was used for the album. But one can’t really blame the higher-ups at Bethlehem for using it twice because it is a keeper—a dynamic mix of sex appeal, photographic trickery and post-Gigi styling that was on point for its time and is wonderfully kitschy today. Bethlehem had a knack for designing great album covers; some more examples can be found here.

Peggy was also an actress who had a few bit parts in movies like The Girl In the Red Velvet Swing before making her recording debut; she would also star in Ernie Kovacs’ show Take A Good Look in 1959, defying the show biz conventional wisdom that pretty actresses couldn’t be funny. Her renditions of standards are not the best or the worst versions you’ll hear. Her version of “Ev’ry Time We Say Goodbye” can’t quite compare to what Sarah Vaughn or Ella Fitzgerald brought to the song, for example. But it is a good example of a 1950’s mainstream approach to classic jazz standards, and I wouldn’t change the station if it came on the radio.

Speaking of unfair comparisons, Peggy briefly dated Frank Sinatra before marrying Rowan Martin in the late 1950’s. Her take on “Why Shouldn’t I,” a song Sinatra recorded in 1945, is ably assisted by Russ Garcia’s sparse arrangement that allows the guitar and brushes to quietly shine through.

Maybe she wasn’t the female Frankie, but Peggy was versatile enough to join folk music training school The New Christy Minstrels (a group that would help start the careers of Gene Clark, Kim Carnes and Kenny Rogers, amongst others) before eventually divorcing Martin and moving to Europe, where she continued her singing career on a smaller but fully respectable scale.