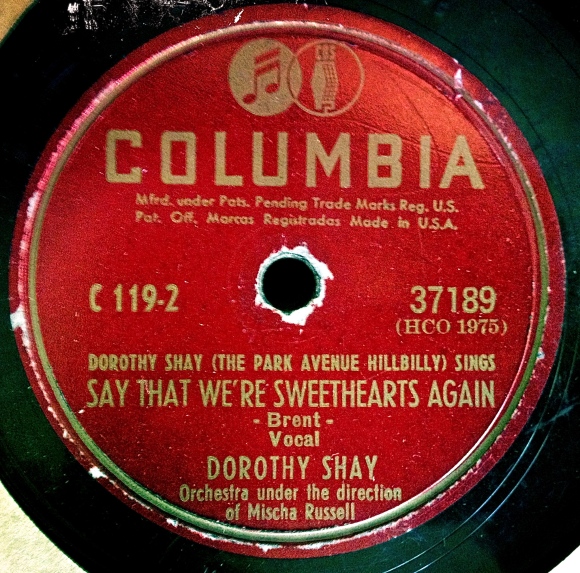 This week’s 78 comes from a brief detour from the Archive. I was recently visiting with my wife’s family in southern California, and her parents were kind enough to let me dig through a big, heavy (shellac weighs a lot more than vinyl) box of 78’s. Some of the treasures found within were by Dorothy Shay.

Born and raised in Jacksonville, Florida, Dorothy Shay started singing in 1925, at the age of four. She used to entertain prisoners at the county jail—how she ended up there at such a tender age is anyone’s guess. As she got older, her style changed from blues to comedic songs, and this was reflected by who chose to sing with—first with the Morton Gould Orchestra and then with Spike Jones and the City Slickers. Dorothy developed a curious persona, that of “The Park Avenue Hillbillie” (Yes, it is spelled “Hillbilly” on the record label, but in promotional materials it was spelled “Hillbillie” because Dorothy was a lady. Those marketing people at Columbia thought of everything.) As glamorous and beautiful as any of her contemporaries, Shay skipped the sentimental tunes for songs that poked fun at all kinds of things, like the often messy pursuit of love in 1947’s “Say that We’re Sweethearts Again.”

A more upbeat take on the vagaries of romance, this time as seen from the perspective of a small town girl who meets a city fella, can be found in “With A Little Indiscretion On the Side.”

Close listeners will note that that the subject of the song may be an uneducated mountain gal, but she’s just as savvy as anyone in the big city.

Here’s an example of Dorothy’s work with Spike Jones. She comes in around the 2:00 mark, with an uncharacteristically sentimental tune called “You Do.”

Interesting, how Spike wasn’t making use of Dorothy’s comedic talents here. Clearly, Dorothy was capable of being a more conventional singer, but the funny songs were the ones that sold, and she enjoyed singing them. Here’s “Makin’ Love, Mountain Style.”

“Feudin’ and Fightin’” takes a darkly comic look at Hatfields and McCoys style rivalries, with lyrics like “let’s give our daughter a gun, now that she’s four/and we’ll go feudin’ and fightin’ some more.”

In 1951, Dorothy played a thinly veiled version of herself in the Abbott and Costello film, “Comin’ Round the Mountain.”

Dorothy Shay was clearly a smart and talented singer, and there’s definitely something to be said for a woman gaining commercial popularity through subversively humorous songs that were often critical of social mores—especially in the 1940’s. Still, there’s something a little off, a little condescending, about songs that satirize life in the mountains that were written by songwriters in Los Angeles and New York—and sung by a woman from Florida, at that. Jacksonville might not be Paris, but it certainly isn’t the Ozarks, either.

That is not to say that these songs can’t still be enjoyed, or that history should necessarily cast a harsh eye on Dorothy Shay. Show business has always been tough, so it’s hard to blame someone for sticking with a schtick when it proves to be successful. And really, when you compare them with the stars of current reality TV shows like “Here Come’s Honey Boo Boo” or “Buckwild,” the country folk in Dorothy’s songs seem downright sophisticated.