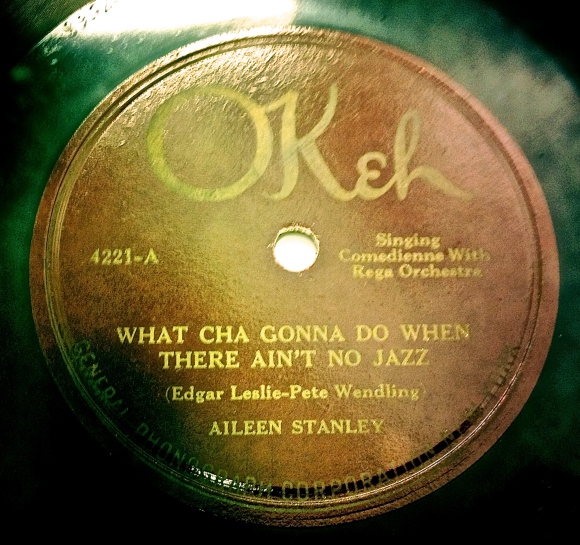 Aileen Stanley was actually born Maude Elsie Aileen Muggeridge in 1897, in Chicago. She and her brother Stanley had a successful vaudeville routine for a few years but he fell in love with a chorus girl and quit the act. Thus, “Stanley and Aileen” became solo act Aileen Stanley, thereby creating the most practical invention of a stage name ever recorded.

Aileen performed in a number of different vaudeville and cabaret acts, but it was her New York City appearance in broadway revue Silks and Satins that led to her first shot as a recording artist. Here she is in 1920 for Pathe records—“I’m a Jazz Vampire.”

In October of 1920 she went to Okeh and recorded the number that I found in the archive: “What Cha Gonna Do When There Ain’t No Jazz.”

Clearly, Prohibition had folks worried about what else might be banned in the name of public decency. As she puts it, “If they’re gonna stop syncopation/How ya gonna get any recreation?” A valid question; we’re all lucky that it never came to that extreme. After all, “Jazz dances are a big attraction/They brought a lot of satisfaction/But how ya gonna get any action/When there ain’t no Jazz?”

Salty stuff. So was this mildly (for its time) racist tune about a sailor who tells the tale of the girl he left behind. Except Aileen is singing, so she swaps the gender of the pronouns as she tells the tale. A woman claiming her sexual agency via the cartoonishly racist exoticization of black men—yay, progress! Progress was a very relative thing in 1921.

Out on the deep blue sea.

But by heck there never was a wreck

‘Cause all he wore was a great big Zulu smile,

My little bimbo, down on a bamboo isle.

Hear those high-pitched woodblocks at the 2:40 mark? Of course you do—they drown out the rest of the music. They were no doubt brought too close to the recording cone. This was an acoustic recording, as they all were until electrical recording was introduced in 1925. The vibrations of singer and band alike were directed at a megaphone style cone that channelled the sound down to a diaphragm that moved the needle to actually cut the grooves in the master record, which would then be reproduced to be sold and played back on Victrolas that, essentially, reversed the process.

Acoustic recording did a poor job of picking up bass frequencies, and Victrolas needed comically large horns to reproduce them. When electrical recording came into play—and when those horns were replaced with speakers soon thereafter—the bass was properly heard for the first time outside of the concert hall. And singers could enunciate a bit more naturally too, thus conveying a greater depth of feeling. 1927’s “Broken Hearted” gives a good example of both improvements.

1930’s “Wasn’t It Nice” is a lovely little tune with some subtle accordion accompaniment. Nice indeed.

Not so nice was the stock market crash of 1929 that wiped out most of Aileen’s savings. In 1931 she moved to London, where it is rumored that she inadvertently ended her romance with Edward, Prince of Wales by introducing him to Wallis Simpson. She returned to the States in 1937, where she lived out the rest of her days as a vocal coach in Los Angeles. She died in 1982.

Tagged 4221-A, Acoustic recording, Aileen Stanley, Broken Hearted, Chicago, electrical recording, exoticism, I'm a Jazz Vampire, My Little Bimbo (Down on the Bamboo Isle), New York City, Okeh, Wasn't It Nice, What Cha Gonna Do When There Ain't No Jazz?