J.J. Johnson (not to be confused with MTV VJ J.J. Jackson) was born in Indianapolis in 1924. He learned to play piano at the age of nine, and then picked up the trombone at 14. By the age of 18 he was playing with Benny Carter’s band and by the age of 21 he was playing with Count Basie. So he knew how to play big band music, no problem. But what about the then-ascendant bebop school of jazz? In the mid-1940’s it was commonly thought there was no place for trombone in bebop, simply because the instrument lacked the keys that allowed trumpeters and saxophonist to be so nimble. Big notes on “Sing, Sing Sing!,” no problem. Trying to keep up with Charlie Parker on “Koko,” there’s a problem. But no less a bebop authority than Dizzy Gillespie heard Johnson’s playing and told him, “I’ve always known that the trombone could be played different, that somebody’d catch on one of these days. Man, you’re elected.”

Kai Winding was born in Aarhus Denmark in 1922. His family came to the United States when he was 12 years old and settled in New York City, where Kai attended Stuyvesant High School. He started playing trombone professionally as soon as he’d finished school but had to put it on hold to do his duty in the Coast Guard. After the war, Kai played with first Benny Goodman’s and then Stan Kenton’s orchestras. Clearly, he also knew how to play big band music.

Both trombonists were tapped to play on the sessions that would become Miles Davis’s Birth of the Cool. The album was recorded over the course of three sessions in 1949 and 1950, and employed a nonet. A nine member band was clearly more ambitious than the quartets that typified bebop, but this was an ambitious group, sprung from the musical discussions at salons hosted by Gil Evans. Those discussions would eventually lead to the creation of cool jazz, a sound that would come to be more associated with West Coast artists like Chet Baker. Kai played on the four songs from the first session—here he is with “Godchild.” Note the tasteful solo at the 2:35 mark.

J.J. played trombone on the other two sessions, which produced eight songs. Here he is on “Deception,” with a solo at the 1:50 mark that has an impressively trumpet-like dexterity to it.

Both trombonists worked steadily on their own until 1954, when producer Ozzie Cadena got them together to record some trombone duets. J.J. and Kai clicked both personally and musically, and they recorded five albums together in just three years, and toured extensively.

Rock and Roll justifiably gets a lot of credit for helping to erase the color line in the 1950’s, what with mixed audiences and black and white artists sharing a bill. But you almost never saw black and white artists playing together at the same time. In Jazz, this was less of an issue. Kai was white and J.J. was black. They played beautifully together, complementing and contrasting each other’s styles with grace and intelligence. That’s all that mattered. 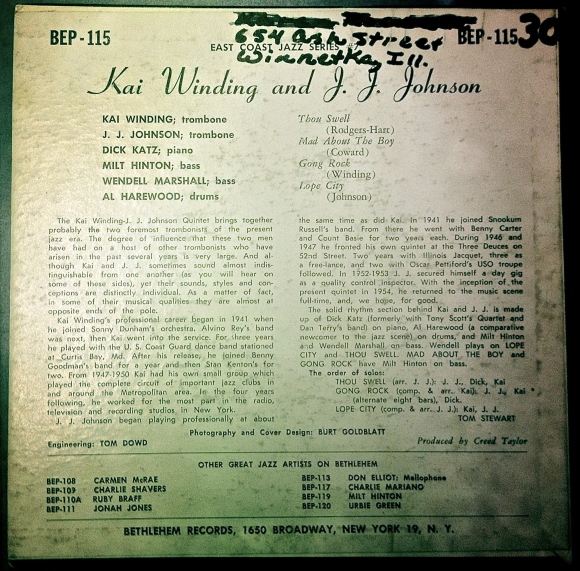 The 45 in question is from Bethlehem Records, a small New York City label (the office was just two blocks north of the Brill Building) that is best known for its releases from vocalists like Chris Connor, Nina Simone and Julie London. But Musical Director Sy Oliver was an experienced bandleader and was no doubt happy to release an instrumental like Kai and J.J.’s fourth album, called ‘Nuf Said. The songs on this 45 were all taken from that album. Note the engineering credit in the bottom left corner of the photo. That is indeed the same Tom Dowd who would later work with everyone from Ray Charles to Eric Clapton to Primal Scream.

First up is a song that manages to be both gloomy and droll, which is quite a feat: “Mad About the Boy.”

“Gong Rock” was a Winding composition that was a lot smarter than the novelty of a crashing gong might suggest.

And Johnson’s “Lope City” sounds like something Miles Davis could have come up with, at least to these ears.

After five albums together, J.J. and Kai parted amicably, having decided that they had done all they could together and that it was time for each person to do his own thing. Kai spent a few years in the mid-1960’s as the musical director of New York’s Playboy Club, but he never stopped performing and recording. Here is a lovely 1971 interpretation of “Lover Man.”

J.J. also went on to perform and record for some time, while also composing music for films in the 1970’s thanks to encouragement from Quincy Jones. His music can be heard in films like Across 110th Street and Cleopatra Jones and television shows like Starsky & Hutch and The Six Million Dollar Man. Here he is in 1961 with his crisp interpretation of “Like Someone In Love.”

Love those abstract variety show backdrops. Seriously, I really do. Strange to think that mainstream television could have ever been so classy.

Kai and J.J. would occasionally reunite. Here they are at a Japanese music festival in 1982, doing “It’s Alright With Me.”

Unfortunately, that was the last time they’d get to play together. Kai died in 1983, survived by his keyboardist son Jai and his wife Ezshwan, a respected painter. Johnson would continue to perform until 1996. He was diagnosed with prostate cancer soon after his retirement, and he chose to end his life by shooting himself in 2001. An unexpectedly sad ending, but we can be grateful that so much elegant, positive music was left behind.