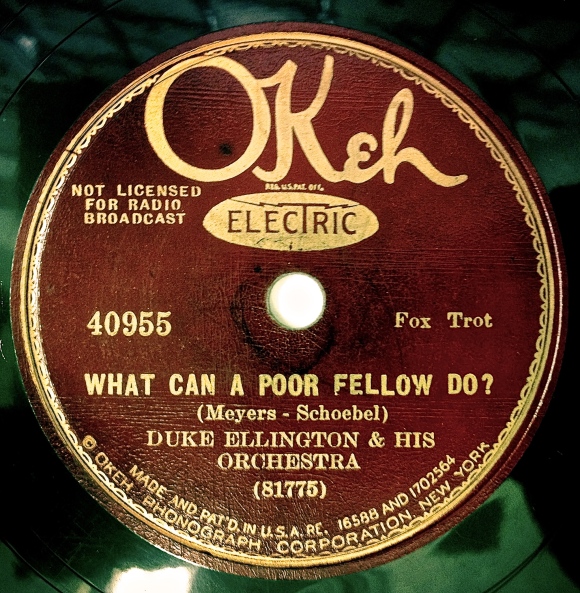 Anyone out there expecting a comprehensive, biographical take on Duke Ellington from me can forget it. I’d have no time to listen to music or make music if I were to attempt to do the man justice, and it’s hard enough getting people to read a 1,000 word blogpost, let alone a 1,000 page blogpost. Big fans of Ellington’s who happen to read this will, understandably, be disappointed by the glaring omissions—both canonical and those subject to personal taste. Righteous anger at the seemingly inaccurate way another person describes a favorite musician or songwriter is, of course, a sign of love for the person being described.

With that in mind, a brief biography: Edward Kennedy “Duke” Ellington was born in Washington, D.C. in 1899. His parents were both pianists, and he started taking lessons at the age of seven, though baseball was of greater interest at the time. Apparently, President Teddy Roosevelt used to pass by on his horse and watch Duke and his friends play. He took music more seriously in his teens and was leading bands in D.C. and Virginia by his early twenties, playing to both black and white audiences, which was pretty unusual at that time. He soon moved to New York City and took the coveted Cotton Club house band engagement when King Oliver turned it down, and the exposure from the club’s radio show helped introduce him to the rest of America. He was a master at making three minute songs—that’s as much as a 78 side would generally allow—as tonally and structurally sophisticated as possible. That knowledge would pay off years later when LPs allowed for more ambitious pieces.

Ellington continued to make music into the 1970’s, just before his death. Over the course of over 50 years of recordings and performances he stretched the boundaries of popular music and blurred the lines between swing, bop, and even classical music. He rightly believed that jazz was a limiting descriptor, and he preferred that his work simply be referred to as American music. Fair enough.

So. The disc in question was released in 1928, hot on the heels of Duke’s first big hit, “Creole Love Call.” That one proved to be a big hit for collaborator Adelaide Hall, as well.

“Black and Tan Fantasy” was supposedly written about “black and tan” clubs in Harlem that hosted blacks and whites at the same time. The use of Chopin’s funeral march at the end might have hinted at how friendships made at these clubs were sometimes ended by racism and/or jealous lovers.

“What Can a Poor Fellow Do?” makes great use Bubber Miley’s “growling” muted trumpet style, just like the A side did. Miley and trombonist Joe “Tricky Sam” Newton are said to have invented it together.

This short film from 1933 is a great look at Duke’s orchestra in action, with a lovely vocal turn from Ivie Anderson. Interesting to see how Sonny Greer’s drum kit includes almost every form of percussion that a symphonic orchestra would have. And stick around for hoofers Florence Hill and Bessie Dudley at the end. Hot-CHA.

This 1943 take of “It Don’t Mean a Thing (If It Ain’t Got That Swing)” showcases band members Ray Nance and Cootie Williams with simple but elegant vocal turns at the song’s introduction. Duke was well known for letting his band members shine, typically writing arrangements to suit the strengths of individual players.

This version of “Mood Indigo” is about as smooth as it gets. Can’t tell exactly what year this is from, but that is definitely Louie Bellson on drums, which would put this sometime in the early 1950’s.

By the 1960’s, big band music had been eclipsed by rock and roll and rhythm and blues.  And jazz was the province of trios and quartets—all the better for individual solos and stylistic experimentation. This 1962 collaboration with John Coltrane proved that Duke was not threatened by these changes in taste, but rather, inspired by them. This is “In a Sentimental Mood,” aka perhaps the best kissing-by-candlelight song ever recorded.

Ellington’s original version of the song was composed on the spot when two women were fighting over a friend of his at a party; it was meant to calm things down, and it probably worked. Here it is, from 1935.

Duke continued to expand his musical palate, spending his last decade as a recording artist composing suites dedicated to sacred music and music designed for dance pieces. This is the fifth movement from “The River,” a suite that accompanied an Alvin Ailey dance performance that premiered at Lincoln Center in 1970.

Duke Ellington died from lung cancer on May 24, 1974. His funeral was at New York’s Cathedral of Saint John the Divine, and an estimated 12,000 people attended. There were numerous, eloquent tributes from all over the world, but let’s close with Stevie Wonder’s, which, fittingly, is also a tribute to American music in general.  This is “Sir Duke.”